The letter below was sent today by Emanuel Geurts to Wiebe Draijer about the suspension of the negotiations at Rabobank and Obvion.

Register here for the Rabobank newsletter

It is good to explain why we do not agree with Rabobank's offer. For you, our members and the employees of Rabobank. I use, among other things, the comparison of the film and photo as well as public figures from the bank and inflation.

When I look back at the photos of each past year, I see a bank that achieves an excellent net result. This year will be closed sharply lower due to corona. Average inflation (CPI) varies from year to year, but the development of the structural salary of Rabo employees lags behind year on year. Sometimes more than other times. 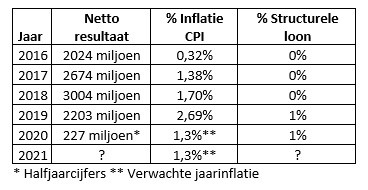 A film is the sequence of a number of photos. It gives an overall picture. The total is the sum of business points, figures, euros, interests, but also a feeling. This means that we now say “no” and do not agree with the bank's arguments. Time and again the cooperative character of the bank is called upon when there are collective bargaining. At the same time, Rabobank is closing offices just as hard, more than 2016 employees have been made redundant since 10.000 and a tidy 'dividend' is periodically distributed to the depository receipt holders. I wonder what the cooperative nature of the bank is reflected in? At least not in the bank's current collective labor agreement offer. Should it then only come from the employees? It's a bit of two-and-one.

Employees indicate that they have an excellent salary at Rabobank, but that it has hardly been worth it for years. For many colleagues who are at the end of their scale it even decreases every year due to inflation. It makes sense that wages are number one in the more than 10.000 employee survey completed. Especially if collective labor agreements with real income developments are concluded with other financials with often the same issues. You can be convinced that you want to work at and for the cooperative bank and you may not want to consistently decline in disposable income.

To my surprise, I read in the communication from the bank that part of your offer, the € 200 net, is nevertheless being distributed to the employees. A nice gesture, but it raises the question for me how seriously you take the collective labor agreement negotiations? Will you do more outside of us towards employees? This feels like playing nice weather while it is raining very hard. An extra day off for employees? No, it is Good Friday that we convert into a diversity day. The development budget is being increased. Yes, but 20 million development budget from 2017 and 2018 has remained unused at the bank, despite your promise that we would really use it up.

We don't say no to say no. The results of the previously held employee survey says enough. A very clear signal. The massive response to the two-day short poll last week, over 1.000 employees responded, has once again given us a clear picture; 75% do not agree with your offer. For several reasons.

The bank has not accepted our latest offer of twice a 1% structural salary increase in 2021 with a one-off amount of € 400 net for employees. Despite the fact that the unions have already added a lot of water to the wine. I think that's a shame, a missed opportunity. I think we could agree on other matters such as the home working allowance, an increase in the development budget, including the remaining budget from 2019 and extra (care) leave. We are quite cooperative; we have proposed that employees can deposit the one-off money into the Rabo cooperative fund and that the bank would double this beautiful connecting gesture to a maximum of € 200,00.

Now is the time for Christmas and reflection. It must have been quite a tough year for you and your colleagues. Just as for the employees who, despite everything, made an effort to put all customers and the bank first. I hope you have time to refuel and start the new year warm. Without a home working allowance, employees literally and figuratively feel left out in the cold. Fortunately, the new social plan, severance scheme and pension scheme will be arranged in 2021. The CLA will continue for the time being, but without any new issues.

We wish you a Merry Christmas and a Happy New Year! ”

If you have any questions, you can contact me via emanuel.geurts@unie.nl.

After two days of negotiation, the FME and vakbondand small steps further in the process to arrive at a new collective labor agreement. The…

ING Bank's current two-year collective labor agreement expires on 31 December 2020. This newsletter focuses on the negotiations on a new…